We spent Thursday afternoon with my precious grandson, James Shepard.

He is sweet and funny and breathtakingly gorgeous. 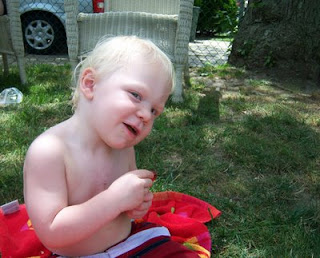 Mary Kate spent about a half an hour pumping up the little pool we got him. After it was filled with water, he primarily played with the box, a broken hose nozzle, Bella (“Bluh Bluh”, with lots of accompanying spit) and his lunch. 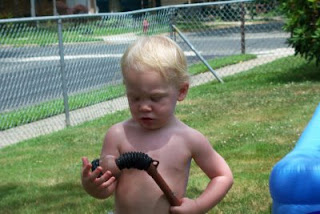 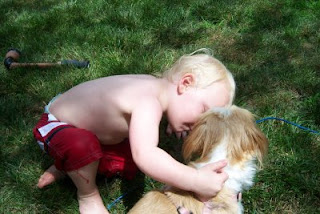 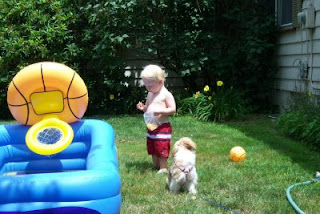 His mom had sent a drink box of ice tea with him. After I gave it to him, he took a few sips. Then he took the straw out and put it back in. Out and in. Made goofy faces with the straw in his mouth. In and out. Out and in. Then proceeded to squeeze the box, creating geysers of ice tea. Then proceeded to turn the box upside down and squeeze, creating cascades of ice tea down his bare tummy. I found these actions hilarious and made no attempt to stop him. The more I laughed, the more he clowned.

Mary Kate sternly told me I was a bad influence. Hey, what are Grandmas for?!?

I mostly sat and watched (and encouraged anti-social behavior) while Mary Kate was running around playing with him. I didn’t even think he was paying that much attention to me. At one point I got up to go in the house and get a drink. He stopped what he was doing and ran after me calling “Nana! Nana! Nana!”.

Be still my heart!!!

I am trying to take good care of myself for several reasons. But he is a big one. Twenty years from now, I want him to know me. I want to be sure he knows how much I love him. 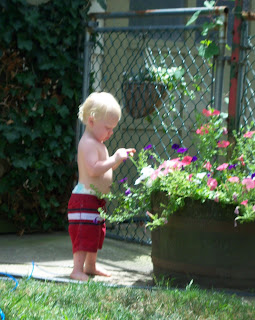 I want him to still miss me when I walk away from him.
Posted by Marie at 6:40 AM

he is adorable......i love them at this age, and i love them in swimming pools, and their little belly's showing. I just want to kiss that belly.

Isn't that belly precious?!? I snuggle it all the time. I can't pick him up because he's too heavy for me, but we cuddle in a chair or on the sofa and I tickle him.

He is such a delight.

I hope all is well with you.

I'm well Marie, better than i have been in ages, not counting the root canal i just had, lol I keep track of you here. Perhaps one day you'll stop by the treehouse and visit us? I'm glad your taking good care of yourself, and i keep you in my prayers, and pray that nothing else will befall upon you......good grief you've had it all. Really, it can stop now, anytime.

But you do have this precious boy.. He is soooooo adorable.

Indeed, this is exactly what grandmas (and grandads) are for. To enjoy all the best parts of parenthood with less of the domestic anxiety. And isn't it always the case, that the simplest toys---a straw or a box---are often the most exciting?