Home, Once Upon a Time


One of the things I have found about being so sick is a tendency towards nostalgia about bygone days.  Another way of putting it would be wallowing in the past.  It can be an exercise in fond memories or a descent into self-pitying regrets.  If I am not careful, I can go way too far into darkness, where to re-hash sadder times is pointless.  It is one thing to learn from one’s mistakes and move on, quite another to relive the same sorrow over and over, to open that book of pain and keep reading.  I try to find a balance, but it is hard.  Pity parties can be such fun.

In a particularly idle moment the other night, I typed into Google the address of the first apartment Dennis and I lived in together, rented in an act of daring months before we were actually married.  It was on East 65th Street in Manhattan, a locale with a usually chic cachet.  But our apartment, on the top floor of a five story walk-up, was a classic Barefoot in the Park pit. I used to joke the tiny one bedroom was the only tenement on the upper East Side.  There was a single sink in the place, immediately to your right when you walked in the door.  The tub had once been in the “kitchen”, a five by five open space with a refrigerator against the wall along with a teeny, ancient stove that had to be lit with a match.  There was a little counter bordering one side with open shelves underneath.  No cabinets.  Crude plywood enclosed the tub.  There was no door on that space, so I hung a curtain over the opening.  Very Bohemian.

The toilet was in a separate little closet all by itself.  It had a skylight, which leaked when it rained or snowed.  The floors were the original wide planks, painted white in the bedroom and covered with hideous dark brown faux wood vinyl tile in the little space that passed as the living room.  There was actually a wood-burning fireplace in the bedroom.  We often had to use it for heat as the building’s boiler was frequently broken.  There was no closet.

Yet I loved it.  I was thrilled to be living in the city.  Every step on the long walks to and from the subway reminded me of how happy I was to be back in New York, where I had grown up before my parents moved us to New Jersey when I was 12.  That sense of energy and unlimited adventure was what New York represented to me.  But as pleased as I was to be there, I have no photos of the place, except for one of me smiling, sitting on the bed with our puppy in my lap.  All you can see is the wall behind me, so it is pointless to even post it here, except that it shows I was happy at least once.  Mostly when I remember that year it is through a mist of pain and disillusionment.  Our brand new marriage was going badly and I was shattered.  I had been so certain that my all-consuming love for him would be enough, but nothing could heal the broken history he carried with him.  Neither of us knew how to be a spouse, so we did what we had learned.  We each stayed in our family roles:  I put on a relentlessly cheerful face and he engaged in deeply wounding abuse, the way he had always been treated and the way his family treated each other.

I was working as an editorial assistant at Avon Books in the landmark Hearst Building on 57th Street and Eighth Avenue.  It should have been a dream job for anyone who had been an English major, but I hated it.  As a guileless kid, faced with the back stabbing and cut throat ambition, I was completely out of my league.  By that time I was expecting our first baby and that was all I cared about.  I just wanted to be a mother.  I had no other career goal.   But if I was unhappy at work, I was desolate at home, frightened by the hurtful stranger I was married to.  I was confused because I was so nice to him, yet it made no difference.  Sometimes he would be warm and loving, sometimes cruel and cutting.  I never knew which I was going to get, so I was constantly on guard.  I was only 22 years old, naïve and with no alternative but to stay with him. My mother had provided this helpful wedding day advice: you’ve made your bed, you have to lie in it.  She made it clear there was no recourse there.  I was emotionally exhausted and we had only been married a few weeks.   Because hope springs eternal, and because I did not have resources or the courage to do anything else, this would be the pattern for the next seventeen years, ending only with his fatal heart attack at the age of 40.

So the little apartment I had been so excited about became a symbol to me of the beginning of a long, hard road.  What I had entered into with such optimism came to be a place that echoed with anger and disappointment.  We lived there for a year before moving to Brooklyn to be near his family.

Incredibly, when I Googled the address the other night, a realtor posting popped up.  It was for the exact same apartment we had lived in.  At first I thought I was being silly, that would be too much of a coincidence.  I looked at the pictures, nothing like the shabby little dump we had had.  We had no shiny new floors, recessed lighting or exposed brick.  But the more I looked, the more I could see the footprint of what had been.  The transformation was jaw dropping.  Our rent had been $165 a month.  The current rent was now $2,350.  For a fifth floor walk up with no proper bathroom and no closets at all.

Here is the layout of the apartment as we had known it: 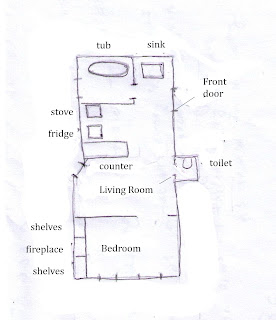 The front of the building, pretty much the same: 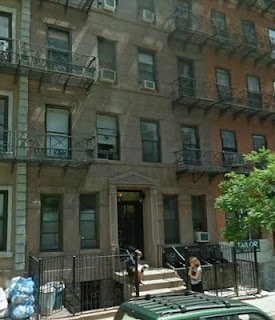 And here are pictures of its present day transformation with notes on the original configuration: 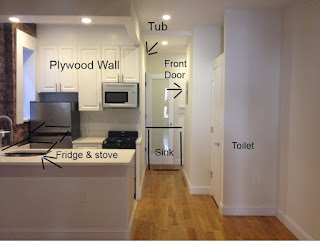 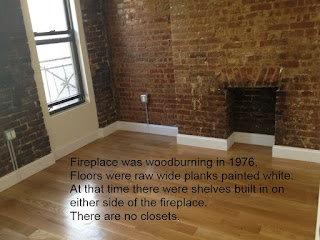 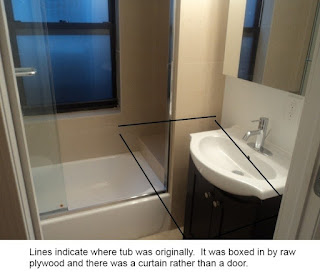 And there was this.  Right before we moved in, Dennis was painting the apartment.  One evening before he quit for the day, he playfully painted something on one of the unfinished walls.  If an archeologist scraped though the dozens of layers of paint that have probably been applied since 1976, they would find in big letters “I LOVE MARIE LYNN”.  Me.  And I hang onto that, the most important thing to remember.  Despite the things he did and said, I think that deep down he really did.  As I loved him.  If only we had known how to prove it to each other.

Did you like what you read? Let others know. Thanks!
Posted by Marie at 1:48 AM 8 comments: