At any rate, Happy Happy Birthday to me and to Bruce (Springsteen, of course) whose b-day precedes mine by a few years but follows mine by a few days.  How is that for a riddle?  Extremely lame?  Yes, I agree, but what can I tell you, I AM lame.  ha ha ha ha   I know, I know I am hopelessly corny.  Happy birthday Bruce and thanks for being a remarkable entertainer and human being.  I know some people consider him controversial, but there cannot be any argument about the abundant good works he does, many of which go unknown.

As for me, it has been quite a sextet of decades, that is for sure.    I have had amazing experiences,
ups and downs.  While the hard stuff has been extraordinarily challenging, the good has been so spectacular that it far outweighs the bad. Most of the good has revolved around my children.  I was blessed to be mother to four cherished human beings.  In ways they will never know, they have provided me with moments of such pure, sparkling joy that I am literally left without words.  Those times, some simply seconds of an exquisite baby smile or a spontaneous, merry hug, shine up through the years.  I hug these memories to myself. They are my treasure.

Even though every day brings struggles, I have so much to be grateful for.  It is hard, especially when I’m dealing with a lot of pain.  But during the hard times, I pray and then I list for myself the things I am so lucky to have.  My darling grandchildren and my wonderful, generous friends.  I still have a roof over my head, although I am not sure for how much longer.  Then there are the little things.  A perfect cup of tea.  A good book.  The tactile satisfaction of embroidery, like painting with thread.  The soft murmur of rain.  My little dog who wants nothing more than to be adored and my even littler cat who is a constant source of irritation but she is unfailingly attentive and as a result it is hard to dislike her.

I miss my mother particularly on my birthday.   We had a fractious relationship for much of my life, but we were so different we were bound to clash.  I was not what my mom had wanted or expected in a daughter, I had wildly divergent values and goals from hers.  I simply bewildered her at times.  As I got much older I made an effort to understand her and not deliberately provoke her by challenging her ideals and taste, as I had for such a long time.  My sister and I had many a good cackle in private, but I was truly sorry I had disappointed her and then rubbed her nose in it.  I talk to her all the time now, telling her how much I regret our lost time.  I believe she is watching over us from her place in Heaven, where she is healed and happy.  Believing she is happy and at peace at last gives me great satisfaction.  But more than anything I wish she was still here.

One thing I have been especially grateful for has been the opportunity to express myself through this blog.  Writing has been one of the most rewarding things in my life.  The sheer pleasure of stringing words together in a way that appeals to people has been a delight.  Sadly, someone I love deeply and whose opinion matters to me, recently told me that they considered my blog something hateful and destructive to our family. I have never deliberately done anything to offend anyone I love, so I was stunned to hear this.  The idea that something I was having such fun with unknowingly caused hard feelings just sucked the spirit right out of me  The accusation has tainted what had previously been such source of pleasure and I have had a hard time finding my way back to writing.  But I am trying and also trying to be attentive to anything someone might find objectionable. 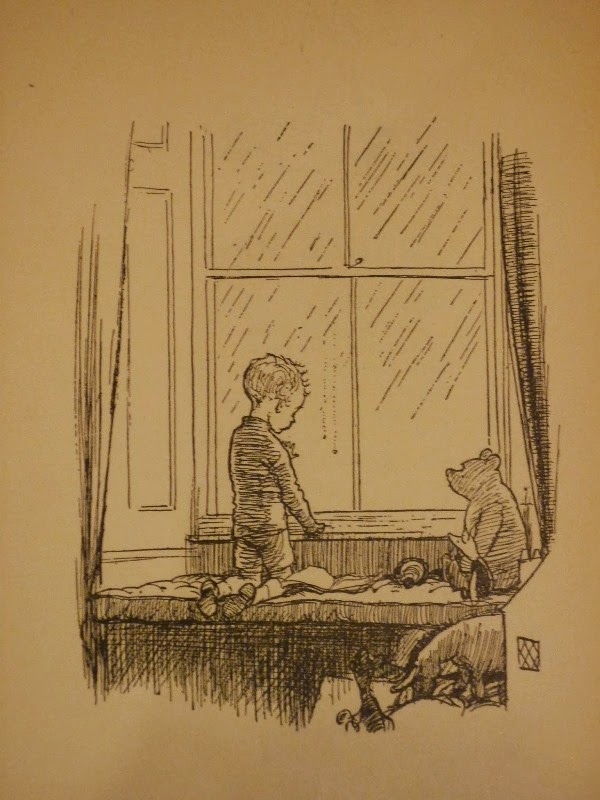 What could be nicer than a window seat and a book on a rainy day?
I have amended A. A. Milne’s sweet poem.  My bit, with abject apologies to Mr. Milne, is added in bold.

Now We Are Six
When I was One,
I had just begun.
When I was Two,
I was nearly new.
When I was Three
I was hardly me.
When I was Four,
I was not much more.
When I was Five,
I was just alive.
But now I am Six,
I'm as clever as clever,
So I think I'll be six now for ever and ever.
Then came some more
Although never a bore.
Decades happily full
Eventful, without any lull.
Ten then twenty then thirty
School, wed, babies, much glee.
Forty cheerfully came
With much of the same.
Fifty arrived with unwelcome news
An illness, alas, would give me the blues.
Now we are sixty, struggling and stressing.
But the Lord, dear friends and loved ones surround me with blessing.

I am so happy to be here still.  Happy Birthday, me!

Did you like what you read? Let others know. Thanks!
Posted by Marie at 6:59 AM

happy birthday Marie! Your gift to us is your beautiful and heartfelt writing. I hope you're able to share your musings with us for years to come.

Happy Birthday, Marie! Mine was on the 7th, so we're both September babies! I enjoy your writing, and I can't see why someone could find it 'hateful.' I, too, had similar problems with a 'reader.' So I shut down my blog and will open another soon.
Enjoy your special day -- surround yourself with those you love.

Happy (belated) birthday, Marie. I hope this one doesn't disappoint, but brings you a measure of happiness amidst everything else you're dealing with.

When I get negative comments from readers, especially those who are not "regulars," I just ignore them. They aren't worth the aggravation of starting up a new blog. IMO, that's catering to them. So, keep your blog as it is, and don't worry about being misconstrued; apologise or explain as necessary and let it go at that.

Here's to many more posts from you!

Happy belated birthday, Marie. I have your blog bookmarked and have been checking regularly hoping to see a new entry. I always enjoy your musings, so please continue! Patricia

Hey, I had a great time reading your website. Can I contact you through email?. Please email me back.

Thank you all for your kind, lovely comments.

I cannot tell you how much your encouragement means to me. I am really struggling to stay positive and it is support from all of you that keeps me going. I am so grateful. :)