This is a football. 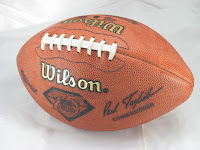 This is a little boy.

Guess which has more value in the United States?

An American football coach says he witnessed a little boy being raped in 2002 in the locker room at Penn State University. Yet, incredibly, he neither stopped the assault nor reported it to the police. He reported it instead to his footballish superiors. Who also did nothing.

Even if nothing really happened, even if there were doubts, these men were morally and legally obligated to report this suspected crime. But yesterday in State College, Pennsylvania students were rioting over the ‘unfairness’ being perpetrated on their beloved football coach. A man who turned a blind eye to a possible child rapist.

The man who allegedly committed this crime is suspected of multiple occurrences of child sexual abuse in the ensuing 9 years.

I know. I couldn't believe they didn't realize how wrong he was to ignore it and that they are still venerating him.

Pricilla, there practically are no words. And I would like to slap silly every one of those obnoxious brats who rioted last night. Unfair indeed!

there are no words marie, what can be said!! shameful, disgraceful, how does one live with one's self. all these years....they knew and choose to remain silent!! it should have been reported to the police immediately by everyone involved.

the churches are doing the same thing, handeling these issues themselves. priests are shuffled around from church to church after commiting the same crimes. it's really an epidemic!!

and those players are shameful as well!!

i hope they all rot in hell!!

Debbie, that is exactly what I thought - how could these men sleep at night?!? How could they look at any child without appreciating what they had done wrong?

Absolutely shameful:( How anyone could abandon a child in need of help is beyond understanding.Not acting when you have the ability to do so is surely tantamount to being an accessory?? Shocking.

Jane, there are so many words we are using, shocking, shameful, etc., and they just barely express the horror I feel. So many people knew what had happened, and what was probably continuing to happen, yet they put football ahead of children.

And what's worse is there are people who still don't think what they did was wrong.

I posted something on this topic today. I attended a deaf residential school sooooo I do know a "bit" about this kind of thing... ick.