I am not what you would call a huge sports fanatic.

My idea of a thrilling competitive event is The Booker Prize award. Or perhaps a spelling bee. Ok, I do enjoy a good Yankee game once in awhile, but that is a family tradition. There was always a Yankee game droning in the background in the home I grew up in. Even in December. I swear.

I have seen, in my whole life, maybe 3 entire basketball games. Not attended, have seen. When my kids were playing/cheerleading, I brought a book to the games and sat reading. Hey, I was a devoted mother in every other way. And ironically, it is one of the few things they do not point out as one of my myriad failures as a parent (that’s their favorite sport.) Even they realize attention to a sporting event was too much to ask.

But I still knew who Coach John Wooden was. And how I discovered him was completely by accident: I caught him on a PBS special (naturally, lol) and I was mesmerized. Coach Wooden passed away this Friday just a few months shy of the age of 100.

His PBS tapes were riveting. He was so soft-spoken, you really had to stop to hear him. He was matter of fact and had no airs, but you wanted to listen. And you wanted more when he stopped talking. He reminded me very much of my grandfather, who I adored. But my grandfather’s love and goodness and wry wisdom were only known to a few of us. John Wooden had an impact of tens of thousands. His simple philosophies were sometimes corny plays on words, but they had a commonsense meaning when you considered it.

As someone who is fascinated by our family histories, by how we develop into who we are through the people who influence us, I was as interested in John Wooden’s parents as I was in him. Even though he had a personal gift of peace and humility, his parents, especially his father, had a tremendous impact on who and what he became.

His parents were not wealthy people and they lost their Indiana farm when Wooden was a teenager. Even worse, while they had four sons, they lost two baby girls to things that were so commonly fatal a century ago. These events would be enough to make anyone bitter. But the Woodens apparently were able to transcend their tragedies with an enviable faith and personal strength. Enough so that their legacy, especially the elder Wooden’s, lives on over 100 years later.

These are the things that Joshua Wooden, born in 1882, impressed upon his son, so much so that John Wooden always had them with him on a piece of paper for his whole life:

• Be true to yourself.
• Make each day your masterpiece.
• Help others.
• Drink deeply from good books.
• Make friendship a fine art.
• Build a shelter against a rainy day.
• Pray for guidance and give thanks for your blessings every day.

Some of Wooden’s own maxims:

The greatest gift you can give your children is to love their mother.

Failing to prepare is preparing to fail.

Ability is a poor man’s wealth.

You can't live a perfect day without doing something for someone who will never be able to repay you.

Because it is not an innate skill for me, I so admire people like John Wooden who can adhere to simple gifts with apparent serenity and composure. I always have good intentions, but they usually go straight out the window as soon as I am stressed. And noble ideas for mindful composure stick to me as well as a Post It note that has a layer of lint on its adhesive.

But that is the journey, isn’t it? We can’t all be born fully formed John Woodens. I have struggled for 55 years to get to where I am today, and I cannot consider that time wasted. I am reminded again that every day is a new opportunity for a masterpiece. If I don’t get there, I can try again tomorrow. At the very least I can focus on my Note To Self, which is always on my blog: Life is Good. Love it. Be Grateful. 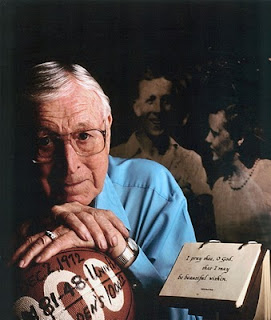 What a lovely article. I had heard of the man, but you brought his wonderful persona to life for me. Thank you!

I didn't know who he was but I knew some of his quotes.

"The greatest gift you can give your children is to love their mother."

Was on a plaque in my son's pediatrician's office. I always wished that my ex husband would have taken him to the pediatrician to see the sign.

Thanks, Pricilla! You are The Intrepid Commenter. I am so glad you are one of my readers. :)

Linda: Glad you stopped by. Thanks for your kind words. We are true neurotic kindred spirits. That story about the shrimp had me in hysterics!!

Jen: My mentor!!;) Maybe that is the t-shirt every newborn should go home in.