And I mean literally warm.

I have been really enjoying a newly found blog, Doing Hard Time in Shaker Heights. Cookie, the author, is smart, funny, snarky and has all-around good taste in any number of things. Similar to mine, natch. Only he has more energy and money to indulge in his good taste than I do. Currently he and his hubby are mired in a wonderful/nightmarish /heartbreaking/hilarious move from Ohio to Maryland. Nuff said. He’ll have blog fodder for decades.

At any rate, one recent adventure for them involved the purchase of gas fireplace logs, which rang in at over $1000 dollars. Not exactly chump change I was thinking…and all of a sudden, like in a corny movie where the flashback is preceded by spooky music and the screen swimming, I am transported back through time to my Aunt Lily and Uncle Jack’s front parlor. Being so sick right now has left me feeling very nostalgic. Alright, alright, I am always nostalgic! I am just a little extra emotional right now. Sheesh. Cut a girl a break.

I grew up in New York City, in the same apartment building as my Aunt Lily, who had been my grandmother’s best friend since childhood in Ireland. Aunt Lily had emigrated here after my grandma and subsequently married handsome police officer Jack Costello, a fellow émigré from the Emerald Isle. They had five sons. My Aunt Lily was stick thin and had a fluttery, nervous disposition (Olive Oyl always reminded me of her, but in the nicest way possible). I can only imagine what those boys, all grown men by the time I came along, must have put her through.

When the apartment next door to Lily and Jack became vacant in 1954, my newlywed parents moved in and promptly had me (not too promptly, though, there was a decent interval). I was a roly poly, cheerful little ball of adorableness and Aunt Lily did adore me. The feeling was mutual. 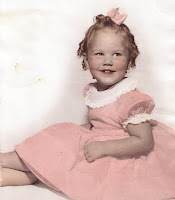 Walking through their front door was like stepping across the ocean into a traditional Irish home, circa 1895. Heavy carpets and drapes kept everything dark and quiet. The furniture was oversized and heavy as well, overstuffed and overflowing each room. The large entrance foyer had a great big oak table in the center, covered with a lace tablecloth. From the foyer one entered the dining room to the right and then the parlor (never the ‘living room’!) was in the front of the apartment. A horsehair suite filled the room and against one wall was a mantel and an electric fire, just like home (Ireland). When turned on, the ‘wood’ glowed as if burning cheerfully on the hearth. It gave off some warmth, but primarily was a visual link to so much that had been left behind in Roscommon, including parents, friends, siblings and, sometimes, even children.

For as an adult I found out (through a family member’s loose lips) that my Aunt Lily had had a little baby boy out of wedlock back in Ireland when she was a teenager. He was put up for adoption and she never saw him again. She was the kindest, most gentle soul. I cannot even imagine the pain she experienced going through an unplanned and scandalous pregnancy and then giving up her baby. If you have seen anything about the Magdalene Laundries of that time, it gives a hint of the horror a girl would face who had made a mistake. Or was taken advantage of, for there was no distinction made. It was always the girl’s fault and she was always the one who paid the price.

As it may have been for her, that electric fire in that dated parlor was a beacon of comfort for me. Being loved that much is irresistible and I was a constant visitor in their apartment. In my own house I could do no right, but here I could do no wrong, and every utterance was pronounced to be sheer brilliance. Including one of my first words. Aged about 18 months, trying to squeeze past my aunt sitting in a dining room chair, I kept saying “Coopen. Coopen peez.” They finally realized I was saying “Excuse me please” and the story was repeated endlessly as evidence of my genius. As opposed to evidence of me repeating something I had heard probably a million times. That is love.

We moved away from that oasis of affection to the back woods of New Jersey when I was twelve. I suppose my parents thought they were doing what was best for us, moving to the ‘country’. But it was like being punished. Where before I had been able to walk to school, friend’s houses, the corner store, the library, here there was nothing within walking distance but cornfields. Worst of all, there was no Aunt Lily. She had sobbed as she hugged me goodbye. But her love had left such an indelible impression that almost fifty years later the memory of those electric logs can stop me in my tracks. I can still feel the scratchy upholstery, hear the murmur of adult voices talking around me, remember the sense of safety as I snuggled up against her leg where I sat on the floor. Her hand stroked my hair and I watched the flickering lights in the fireplace. 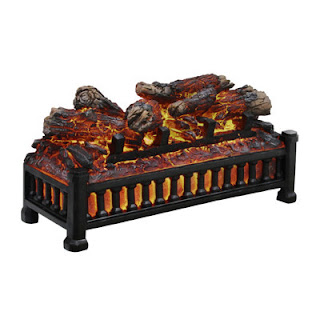 Did you like what you read? Let others know. Thanks!
Posted by Marie at 6:23 PM

What a lovely story..bittersweet as you left such a loving, supportive Aunt behind. Still...every child deserves to have an extended family member be their "person". The person that adores them and sees only good. I love that you had that person at least for a time.

Beautiful memories, Marie. I, too, had such a person in my life, but my home life was also special. I really only have joyful memories of my childhood. I wish every person could say that.
Peace,
Muff

Loved it! It bespeaks to mysteries of the mind what it locks away for safekeeping, and yet it holds extra keys to unlocking these important memories in secret, only revealing them when we come across them by accident.

What a beautiful little girl you were! I love the ringlets .

A lovely memory triggered by a few words. Thank you for sharing it. I had an electric log fire in my first home, though not as grand as the one in the picture

Cheryl - Hi! Thanks so much for your comment. I was incredibly lucky, I had a large extended family of older people in our apartment building who were very, very good to me. That, plus my wonderful grandparents, kept me feeling loved at a time I really needed it. It was a lovely place to grow up. :)

Muffie - how absolutely wonderful that you had a consistently loving, happy childhood! So few people get the parents they deserve, it always makes me happy to hear when someone did. It shows in your perspective, too. :)

Cool Cookie - Welcome and thank you for your kind comment! One of the reasons I love the Internet so much is because I get to meet fantastic, interesting people, such as my readers, that I never would have known otherwise. But the other reason it that it is such an opportunity to share with the world the people who have made a difference in my life, such as my beloved Aunt Lily.

Anji - You are so sweet! Thanks for the lovely compliment. The picture with the long ringlets was taken the day after my brother and I played barber with Snippy Scissors. He cut off two of my ringlets, one on either side of my face, and he gouged a chunk out of my bangs. My mother was none too pleased. lol

That electric fire is one that is close to what I remember, but it is contemporary and on Ebay for less than $150!! I am tempted to get one and I have a real fireplace!! lol

Thank you all for stopping by and for your comments!!