Not That I’m Bitter

It has already been two months since I was laid off. Time flies when you are consumed by worry and anxiety and rejection.

The fact that the layoffs were due to an epic level of mismanagement is especially enraging disheartening. Some people with a lesser character might consider a slow, painful, perhaps fiery, death too good for the people responsible. I, however, choose the high road. You know, the road above where you actually get to watch them die.

I can tell you a story though. This is a completely mythical tale. Uh huh, it is. (You can’t see it, but my head is nodding.)

Once upon a time, a company dwelled in a tall tower. This company was managed by people called Blockheads. Panic driven, incompetent, fear based blockheads.

One day the Blockheads said “Let’s get some contracts that will pay us millions of dollars by promising some dupes, I mean companies, the moon.” They clapped their hands and cheered because they were going to get millions of dollars. Even though what they promised was impossible to deliver.

The Biggest Blockhead realized “Uh oh. We don’t have anyone to do the work we just promised!”

“Uh oh!” cried the other Blockheads.

So they scurried and hired many people, some sight unseen, because the minimum requirement for the work was breathing.

“But how will we learn the job?” they cried.

“Teach each other.” was the response. And the Blockheads disappeared into a conference room and would not be disturbed. 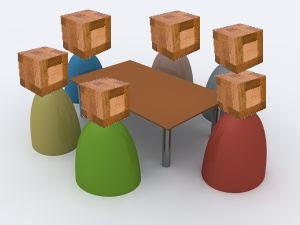 The New People tried to do the work as best as they could, as they needed jobs. But much of it didn’t make any sense. And each week the Biggest Blockhead told them to do something different from the week before. And he would call them names when they didn’t get the moon, like ‘lazy’.

The Biggest Blockhead’s management style was screaming, yelling, cursing, and throwing things in the office against walls. It is believed he was a model for Mussolini. He perpetually yelled this: “I HAVE AN MBA!”, while thumping his chest. The New People guessed that he was attempting to intimidate them with his intellectual accomplishments, but they all laughed at him behind his back. They believed MBA actually meant “Maniacal Bullying Ass” not Master’s in Business Administration. Because no one with an actual MBA could run a company down so thoroughly or be so bad at management. He routinely sent out e-mails criticizing the New People. These were so long, so confusing and so rambling that everyone had the same response upon getting to the end of one of these manifestos: “Asshole.” 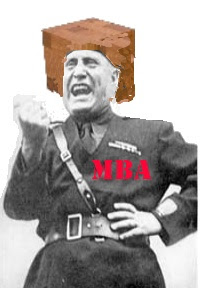 Other Management Blockheads wore about a half dozen hats each, none of them very well. And they switched hats constantly, so often the New People sometimes didn’t know who they reported to from one week to the next. The New People couldn’t get answers to questions or they would get conflicting answers to questions. There was no IT staff and no Human Resources. The Blockheads were having trouble with cash flow, furloughing workers every week in order to meet payroll.

Eventually, the companies the Biggest Blockhead had promised the moon to wanted to know where it was. His response was to yell more at the New People, who were already running frantically like hamsters in a wheel, all of them doing something a little different because no one had ever really told them exactly what to do. The Biggest Blockhead was panicking because the people he promised the moon to were catching on and ending their contracts.

There soon were only two contracts left. Four others had been ended when the companies didn’t get the moon as promised.

Now the New People were scared too, because if these contracts went, so did their jobs. And it was proving impossible to get the moon.

Finally, one of the last two companies ended their contract. They actually had discovered that they had an in house department trying to get the moon and they didn’t have to pay the Blockheads anymore. They were Blockheads too!! But that was it for many of the New People, even though they had worked hard and done everything they were supposed to. Even though they had actually chipped off pieces of the moon! They were laid off. Over the phone. And they were told, I swear someone really said this, “It’s not personal, its business.”

Unfortunately, as we all know, it is very personal to the person they lay off.

So, to this day, the Blockheads are still trying to catch the moon for their last client, threatening and generally abusing the New People who are left.

The moral of the story is…beware of Blockheads.

Email ThisBlogThis!Share to TwitterShare to FacebookShare to Pinterest
Labels: asses, blockheads, bunglers, incompetent, so sue me

That kind of thinking is exactly the reason I am not gainfully employed. A friend and I wanted to "share" a position, which would have guaranteed that they got more than half out of each of us. They turned us down.

A year later, they called and asked me to come back. Pretty please. I had so much fun telling them to shove it in an anatomical cavity.

It's hard to believe some folks can get away with founding a company with, as it sounds like, no real product! I'm afraid there's a lot of folks with pieces of paper who believe they should automatically be successful. Like me for example; I'm sure my piece of paper means I should be more than a housewife but alas Mr T is more sceptical:))) Fingers crossed something comes up soon for you Marie.

Good to see you updating Shorebookwoman - couldn't get it to accept my log in to comment. I'm looking forward to seeing what you new posts you have up your sleeve:)

Are your blockheads ex congresspeople?

Unfortunately, that happens a lot and the employees are the ones who suffer. I have found that there are many people out there who are excellent at making promises but not so excellent at delivering. I have picked up a number of clients that way.

I'm so sorry you got laid off. It is no fun, even though this post was a lot of fun. I worked for a company just like this. I was a new people and had no idea what it was I was supposed to do because there was no training manual, no trainer, no memos, well there were lots of memos but none of them told us what we were supposed to do. That company also lost all its big clients like Target, Best Buy and Bed, Bath and Beyond. I was laid off shortly after that, along with about 200 other new people. It sucked, but at least it wasn't personal.

Thanks for stopping by everyone!!

Mother: I have been in management for a long time. I am not a genius by any stretch, but I AM a good manager. And I learned to be by observing all the mind-bogglingly BAD management out there.

Just like your example, so many are short sighted, rigid, self important...I could go on and on.


Jane: It is SOOOO good to see you!! I have been the most appalling friend, but I am still working on something for you.

The product (mythical, of course, I signed a 'do not disparage' agreement) in question is intellectual property. It could work if it were managed better. I offered to write P & P's, a training guide and do a marketing plan for free on my on time. They turned me down.

I'm really happy to be back to my book blog too. I hate that comment thing. It just appeared, I didn't download it on purpose but now trying to get rid of it is a nightmare.

Pricilla: Congresspeople certainly would fit. So would the executives at NBC who caused the whole Conan thing.


Anne: This (mythical) guy is a fast talker, but once people get to know him,they want nothing to do with him. As far as I know, he has never been able to completely deliver on anything.

I'm glad that sort of thing has been profitable for you though. :)


Jen: Thanks for the kind words. :) I am trying to use this as an opportunity to write more and to develop my on business too.

Good luck, Marie! You're better off without those damn blockheads anyway. A paycheck would be nice, to be sure, but not at the expense of your sanity and well-being.

Oh sweetie, my sanity and well being are long gone!! lol

All kidding aside, you are right. This was, oops, if it were real, could have been an incredibly toxic work place.

Except for the paycheck thing, which is kind of a big deal lol, I am better off out of there.

What a scary story! I'm glad that it is just a fairytale, and could never happen in real life ;-)

Best of luck in overcoming this horrible experience.

Hey Mitch!! Thanks so much for stopping by!

Absolutely, thank goodness it was just a fairytale!! Phew, it would be too awful to really have such and experience! lol